Sandwiched between the River Nene and the Peterborough to Cambridge railway line there is a little sliver of brownfield land, the remains of the old Peterborough East station, which is probably the most botanically important area in the city centre. If you travel on the Cambridge train you can pick it out by the startling chrome-yellow sheets of Biting Stonecrop Sedum acre that are in flower at the moment. 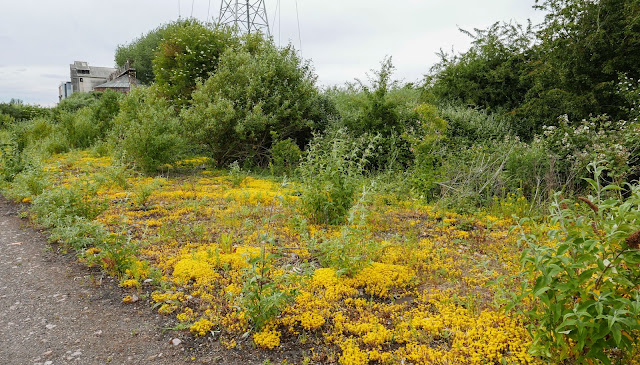 The best quality habitat is to the west of the Frank Perkins parkway, and is easily accessible from a well-used footpath to Stanground. The area forms part of a more extensive corridor of brownfield land along the railway, which further east is included within the Wildlife Trust's Stanground Wash nature reserve. The substrate is formed from railway clinker, which is very nutrient poor and highly base-rich when fresh, but over time the calcium ions leach out leaving areas of more acid substrate. These unusual properties encourage a very rich flora, with both calcicole and calcifuge species growing in close proximity. 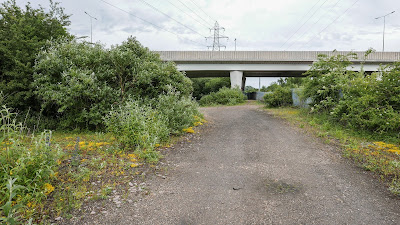 Peterborough East station shares many characteristic species with the railway land at Stanground Wash, including Viper's Bugloss Echium vulgare, Common Stork's-bill Erodium cicutarium and Perforate St.John's-wort Hypericum perforatum but it also has strong populations of several species that are not known from the nature reserve, such as Heath Speedwell Veronica officinalis, which is considered to be Near Threatened in England, and Grey Sedge Carex divulsa subsp. divulsa.


The most important of these additional species is undoubtedly Wall Bedstraw Galium parisiense, a species that is listed as Vulnerable in Red Lists for both the UK and England. This diminutive cousin of Cleavers Galium aparine is a small annual of bare ground, favouring very nutrient-poor, summer-parched substrates which prevent competition from more robust species. This predominantly Mediterranean species is largely restricted to the warm and dry climates of the south-east but many former populations have been lost. There are only a handful of populations in Cambridgeshire, the most important of which occur on similar substrates at Whitemoor Railway sidings in March and at Conington tip, where it was introduced with translocated soils from Whitemoor. The population at Peterborough East station is well-established and numbers many hundred individuals.

Like many brownfield sites, the flora of Peterborough East station  also contains a number of species that have become established in the UK more recently such as Large-flowered Evening-primrose Oenothera glazioviana. However, the presence of sheets of a small, fluffy grass with noticeably purplish awns was initially a puzzle, but after a little detective work it was confirmed as Southern Beard-grass Polypogon maritimus. This species is slenderer than Annual Beard-grass Polypogon monspeliensis, which is now widely established in brownfield sites around Peterborough, and has more deeply bifid and longer hairy glumes and an unawned lemma. The invertebrates of the site have scarcely been looked at, but even based on a half-hour of superficial examination, are interesting. Biting Stonecrop Sedum acre supports the rather local bug Chlamydatus evanescens, at one of its most northerly British locations; Stork's-bill Erodium cicutarium has the very local squashbug Arenocoris falleni and the only currently known Peterborough population of the burrower bug Odontoscelis lineola at the northern limit of its British range; and two Nationally Scarce weevils, Sibinia primita and Gronops lunatus, are associated with Pearlwort Sagina spp.

The whole site is included within the Fletton Quays Opportunity Area and will be developed in the near future. Listed buildings on the site will be protected and enhanced, and it is to be hoped that the same enlightened attitude will be taken to this biodiversity hot-spot, which could provide a colourful and low maintenance area of open space for all the residents of the city to enjoy.