A multitude of mulleins

Recently I've been working on some land close to the East Coast mainline, which is one of the richest sites I know for mulleins. These can be rather puzzling, as like many taxa, they hybridise freely. So far I've recorded at least nine taxa, although only eight this year. These include: 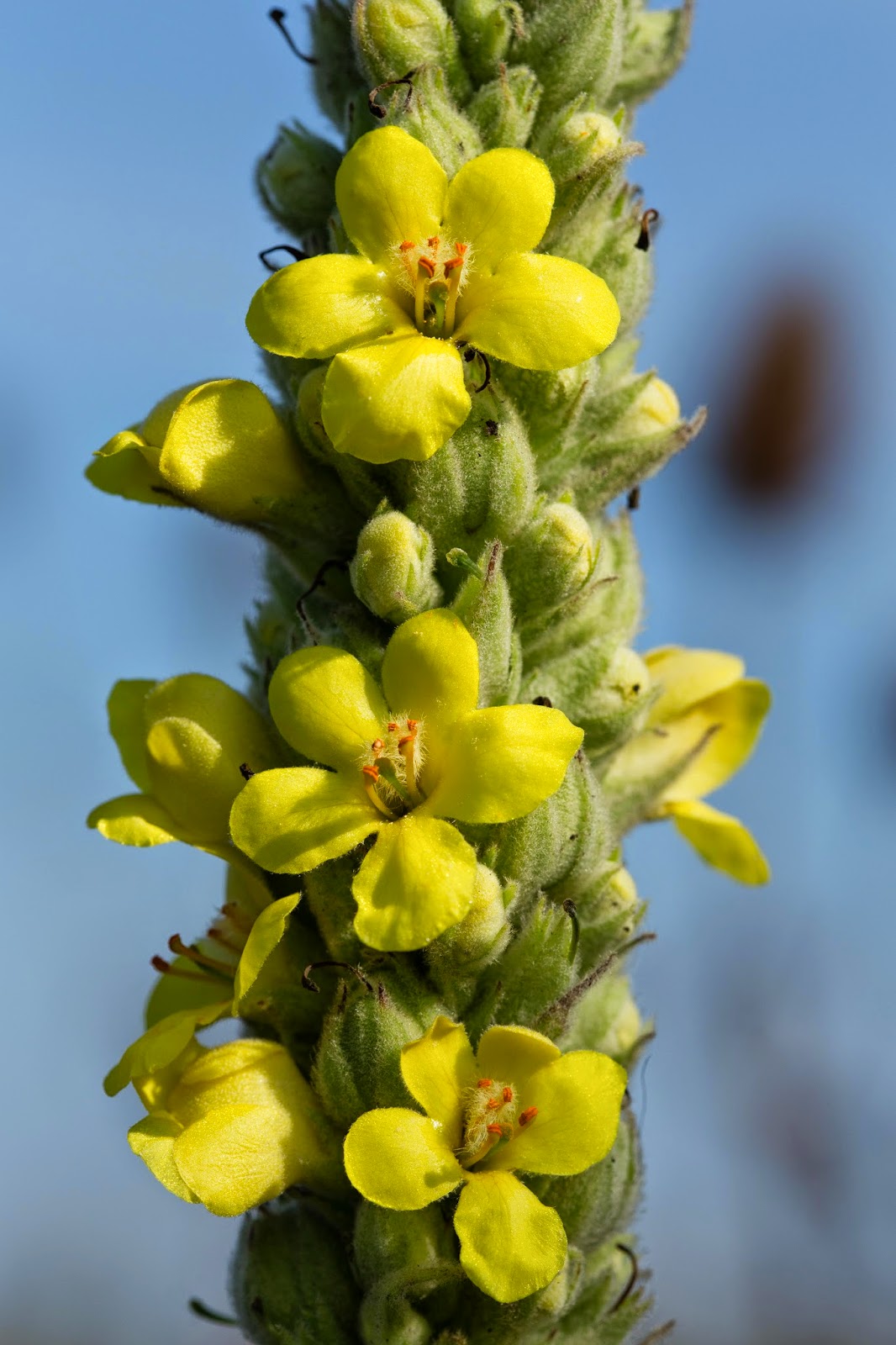 This is by far the commonest species, and has the anthers of the two lower stamens asymmetrical, branched hairs, decurrent leaves and a capitate stigma. All the hairs on the anthers are white and it normally has an unbranched inflorescence. 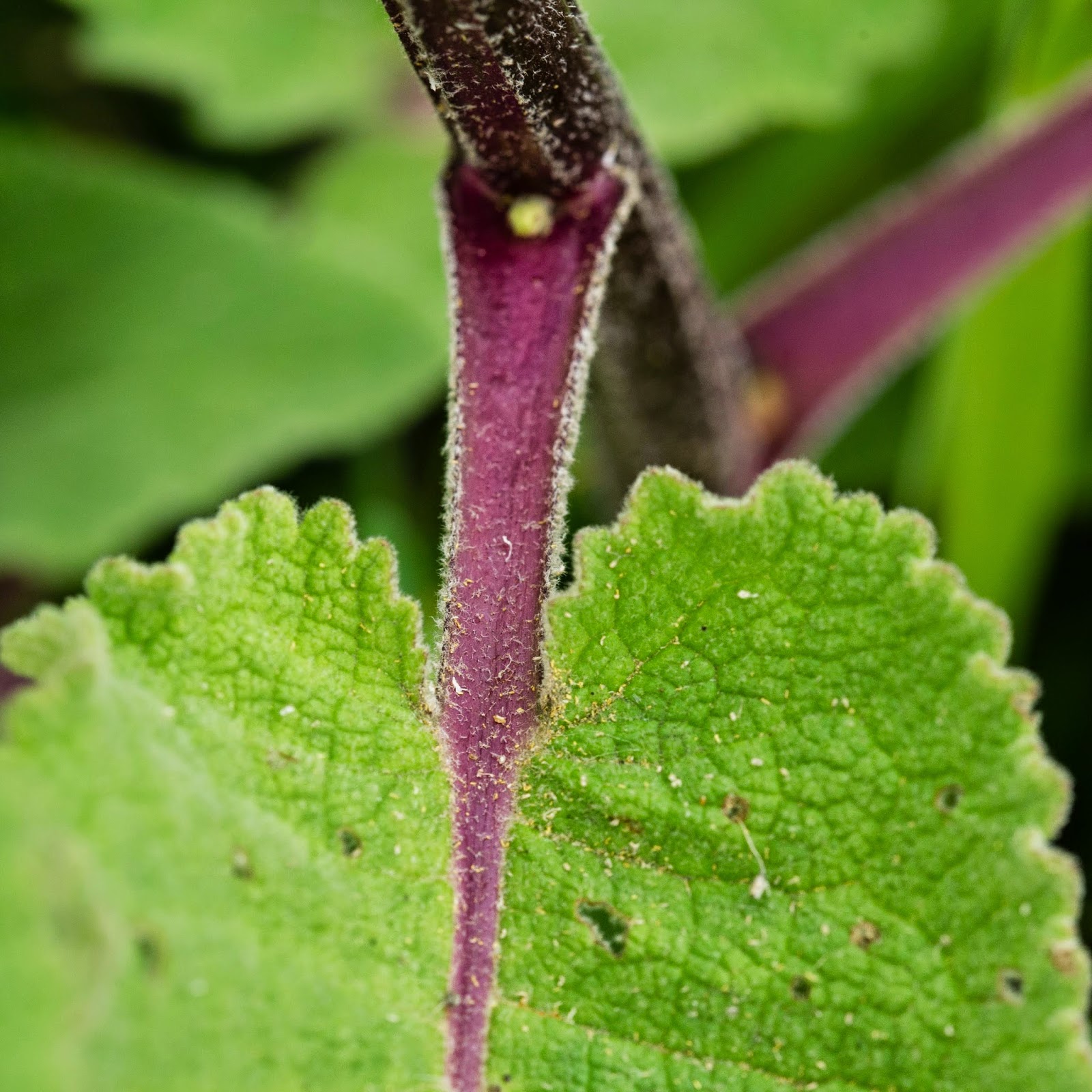 Once again the flowering stem is usually simple or sparsely branched but the anthers are all reniform and symmetrical, many hairs on the filaments are violet, there are several flowers per node and each pedicel has two small bracteoles, the pedicels are of variable length and the bases of the leaves are cordate. 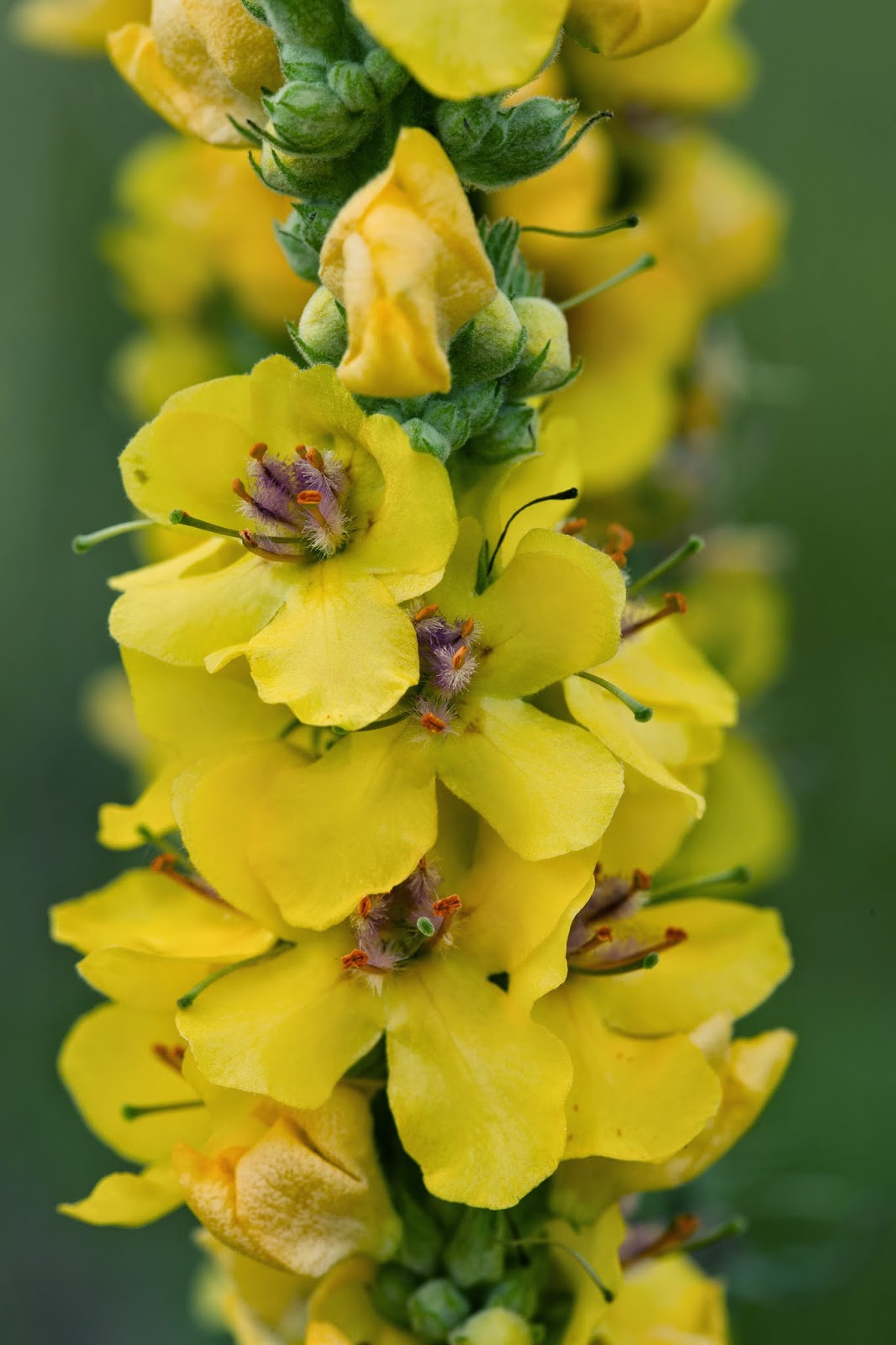 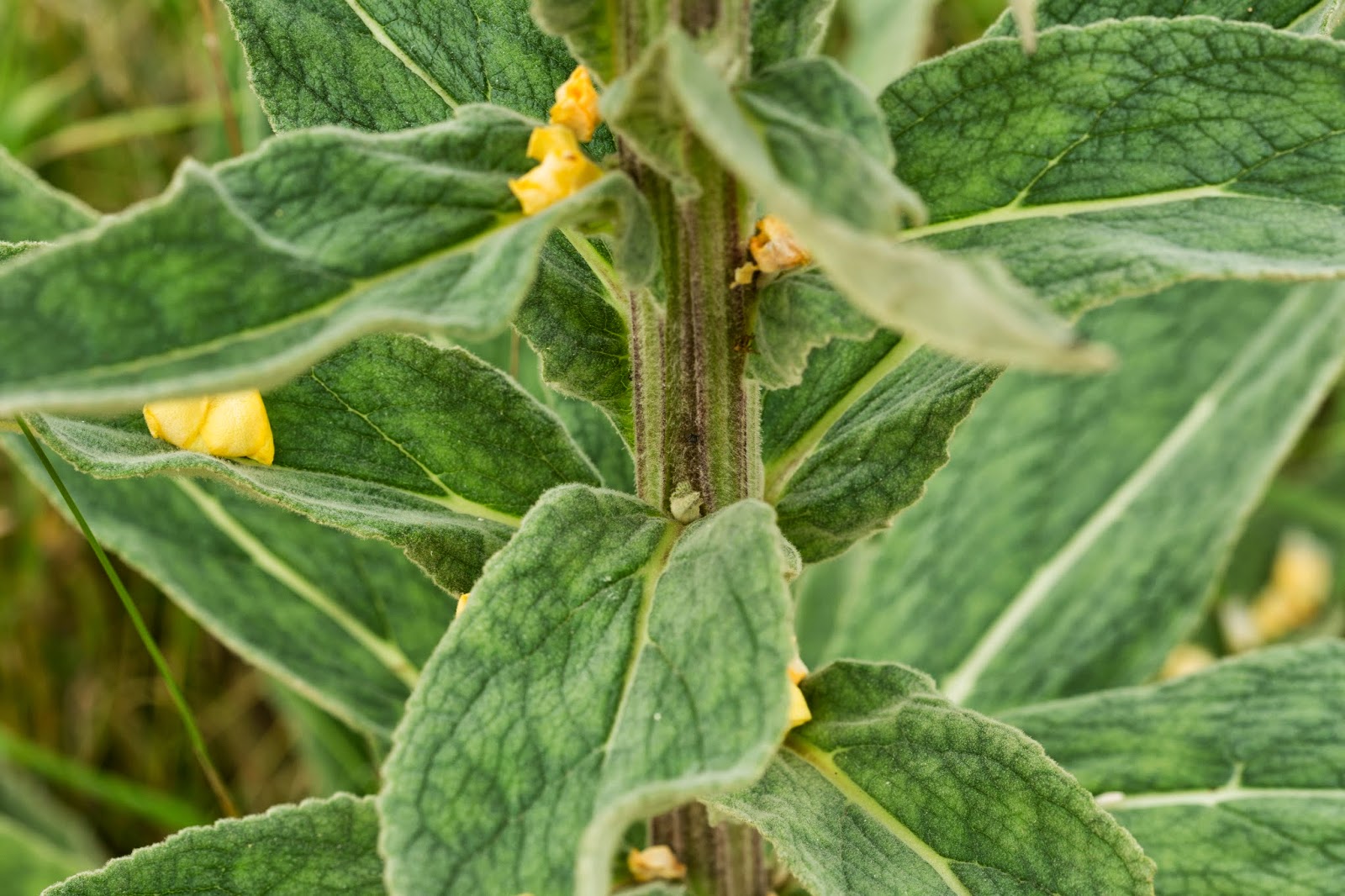 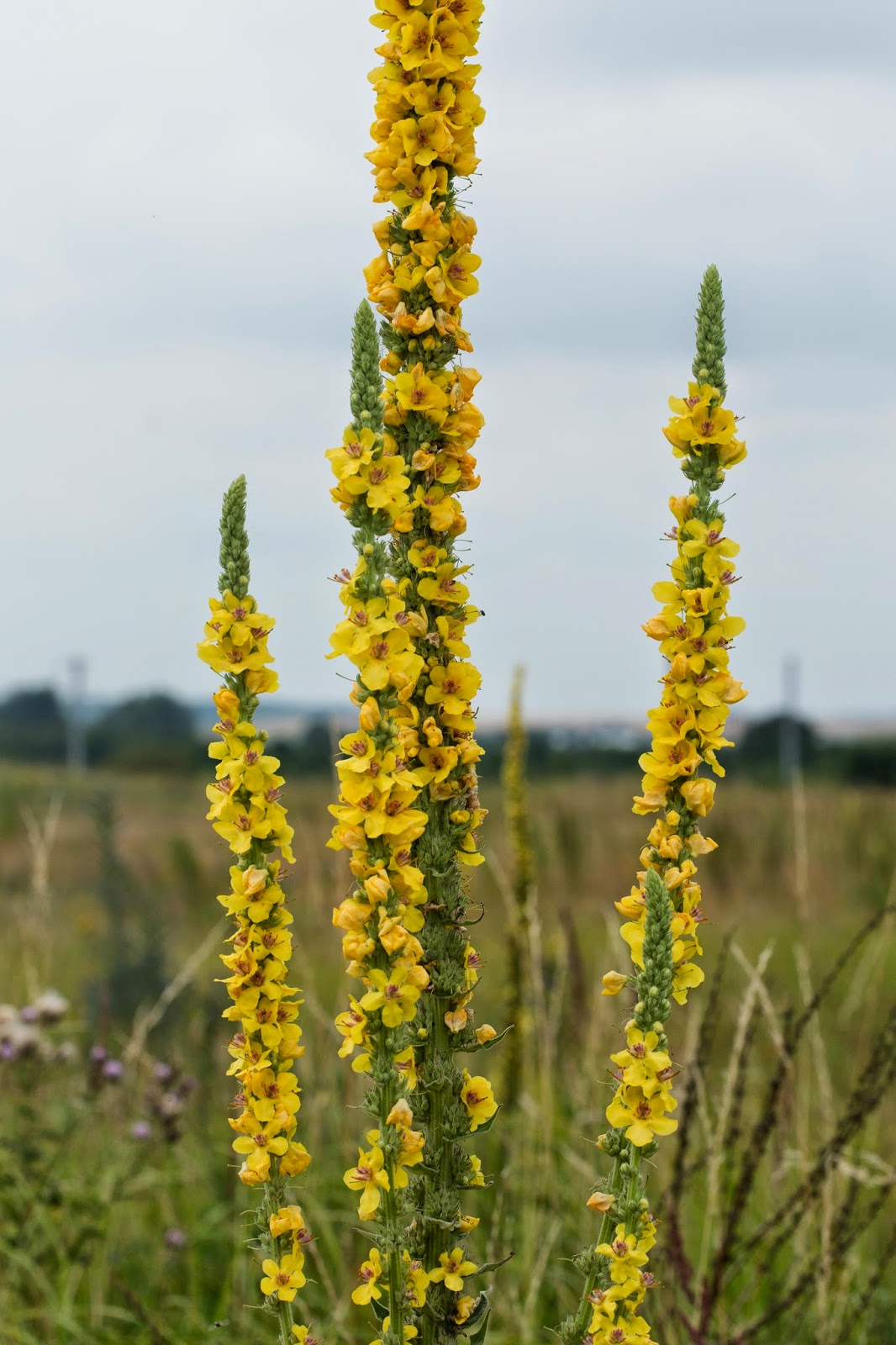 This is by far the commonest hybrid in the genus and is quite frequent where both parents occur. All anthers are reniform and symmetrical, and usually the upper 3 filaments have violet hairs and the lower 2 white hairs, though there can also be a rather more random mix. 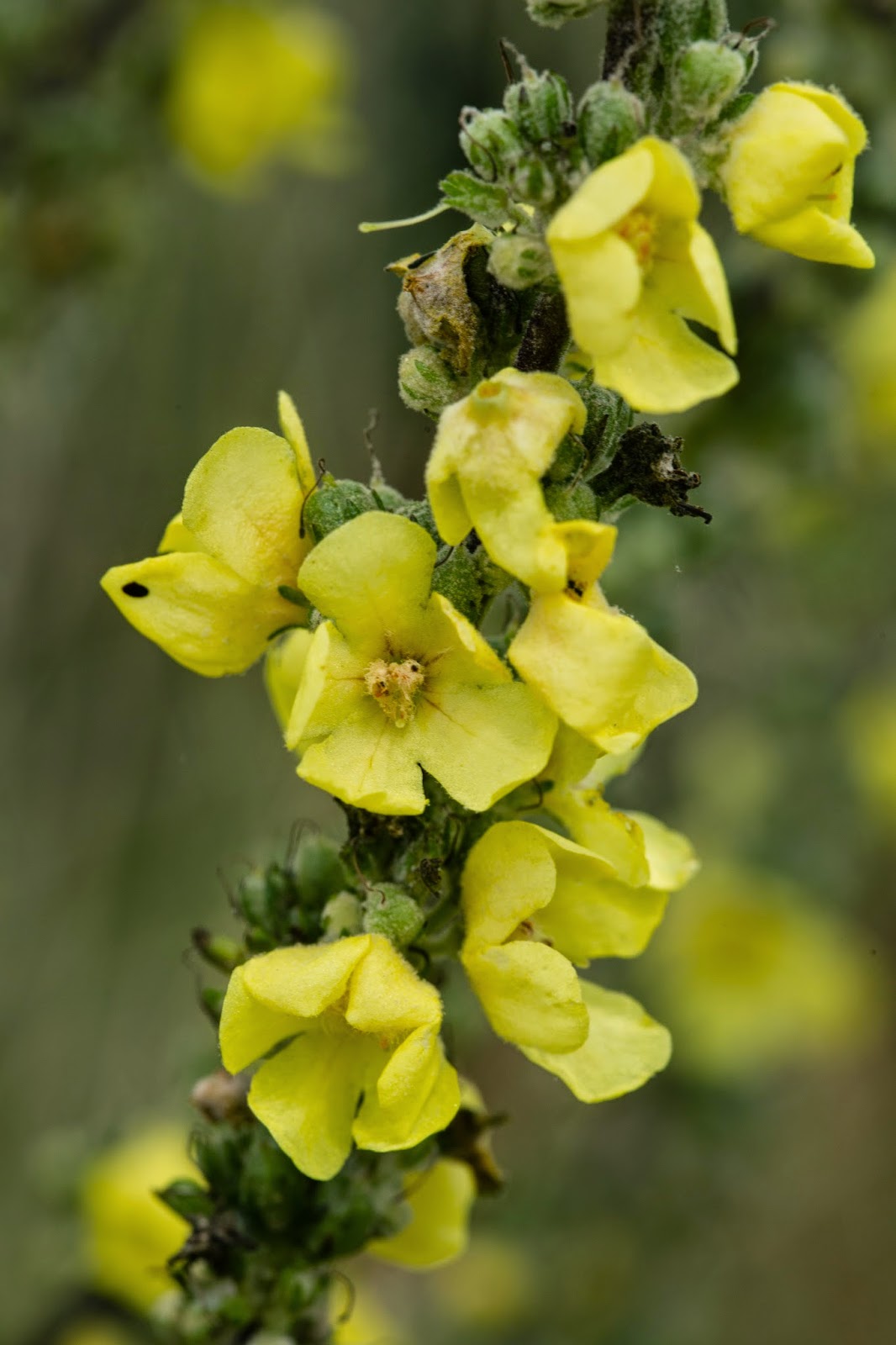 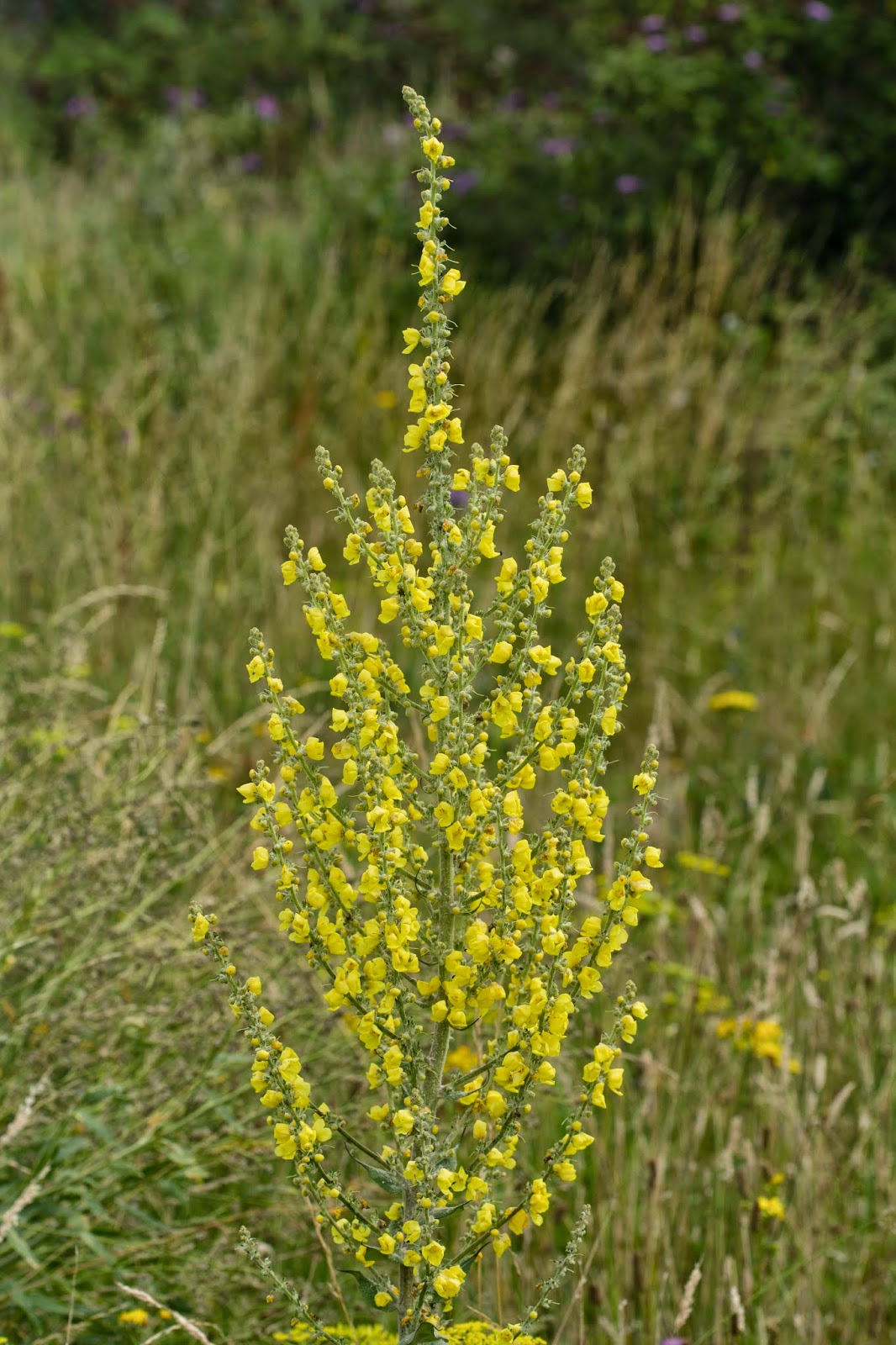 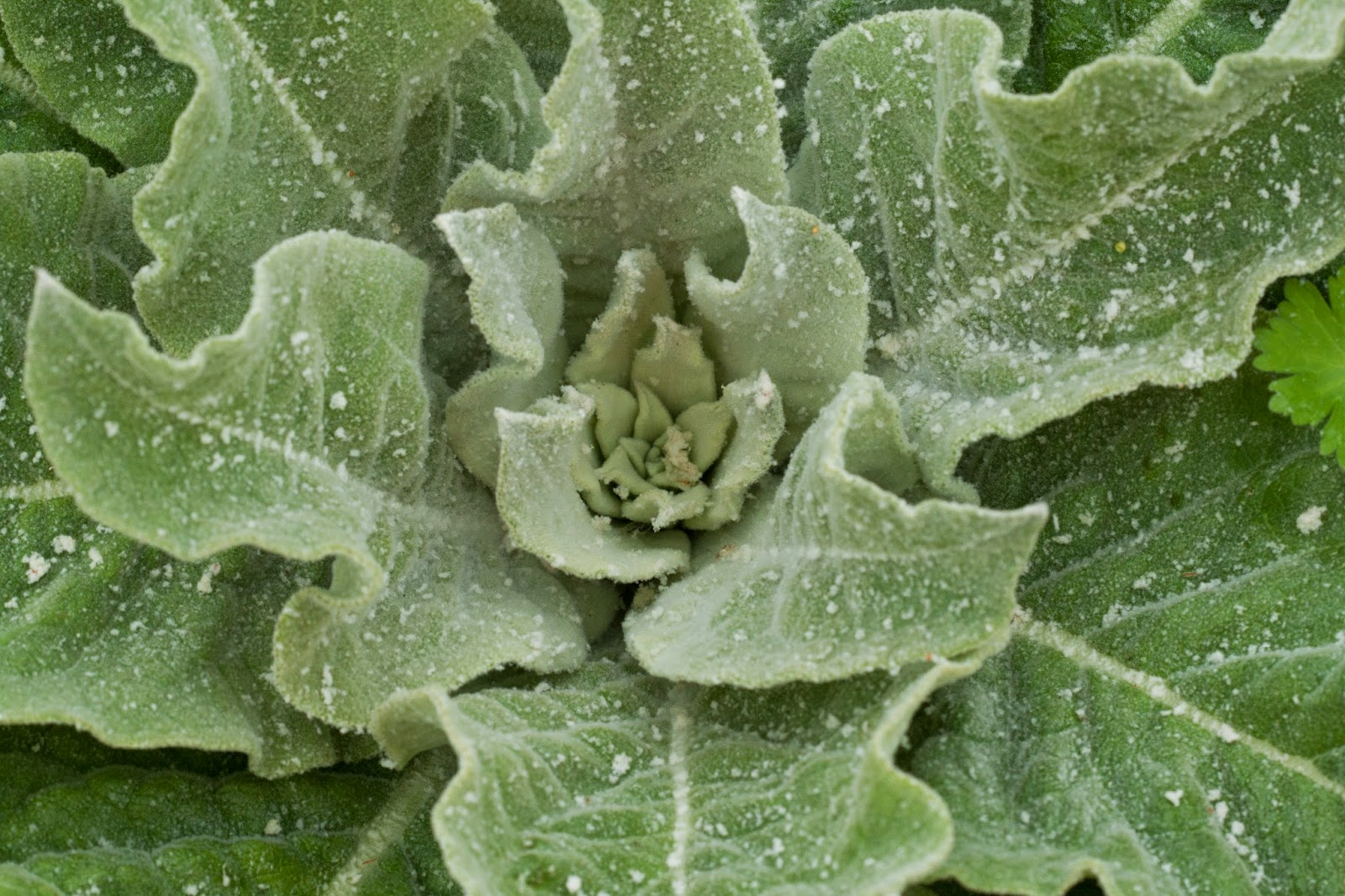 A local species of East Anglia, whose spectacular branched inflorescences can often be seen on road verges, particularly along the A14 in Suffolk and the A47 round Norwich. The anthers are all reniform and symmetrical, and the filaments have dense white hairs. The leaves are are mealy and the hairs gradually rub off (they're also very irritant!). This one is pretty unmistakable. 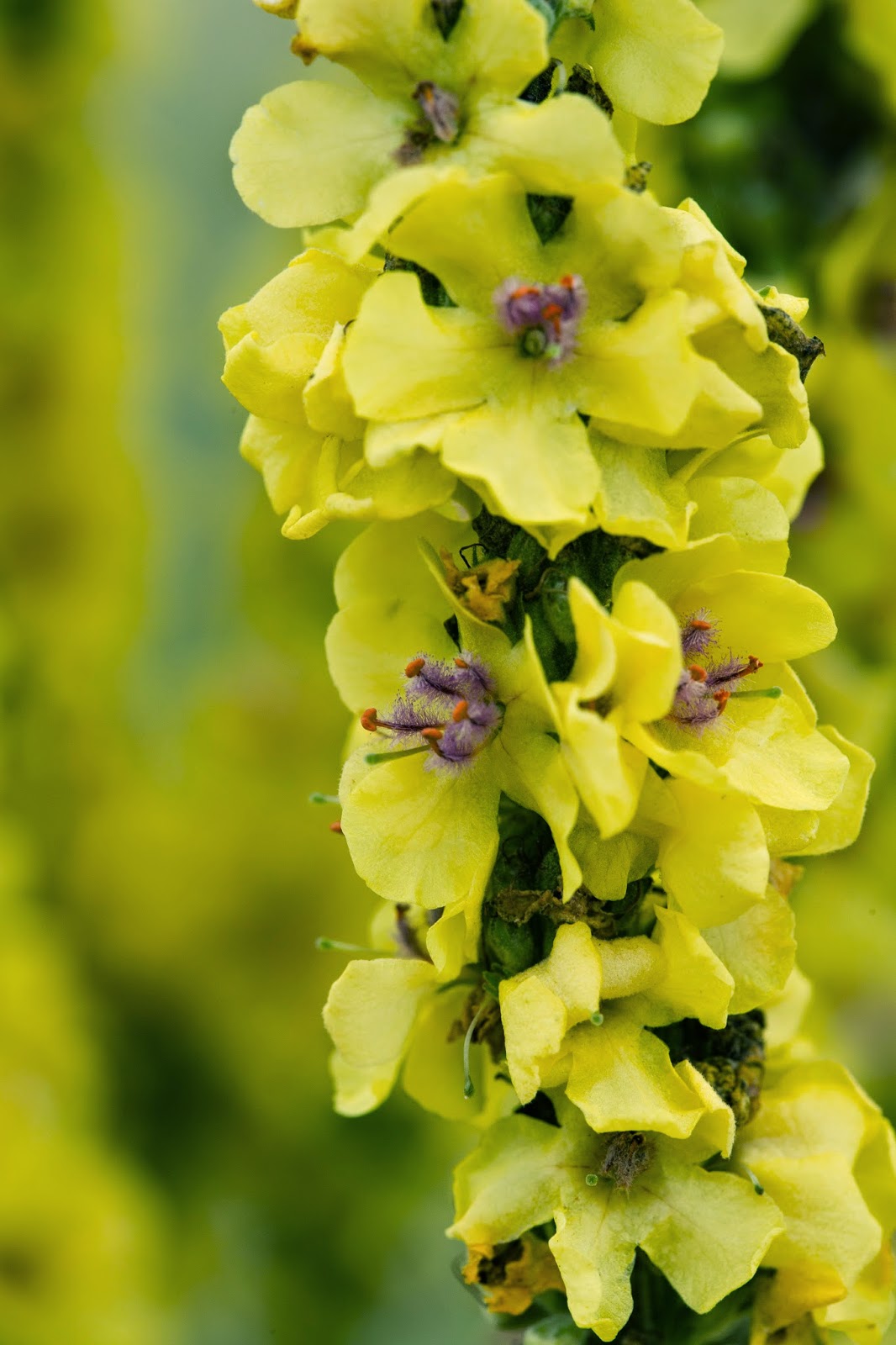 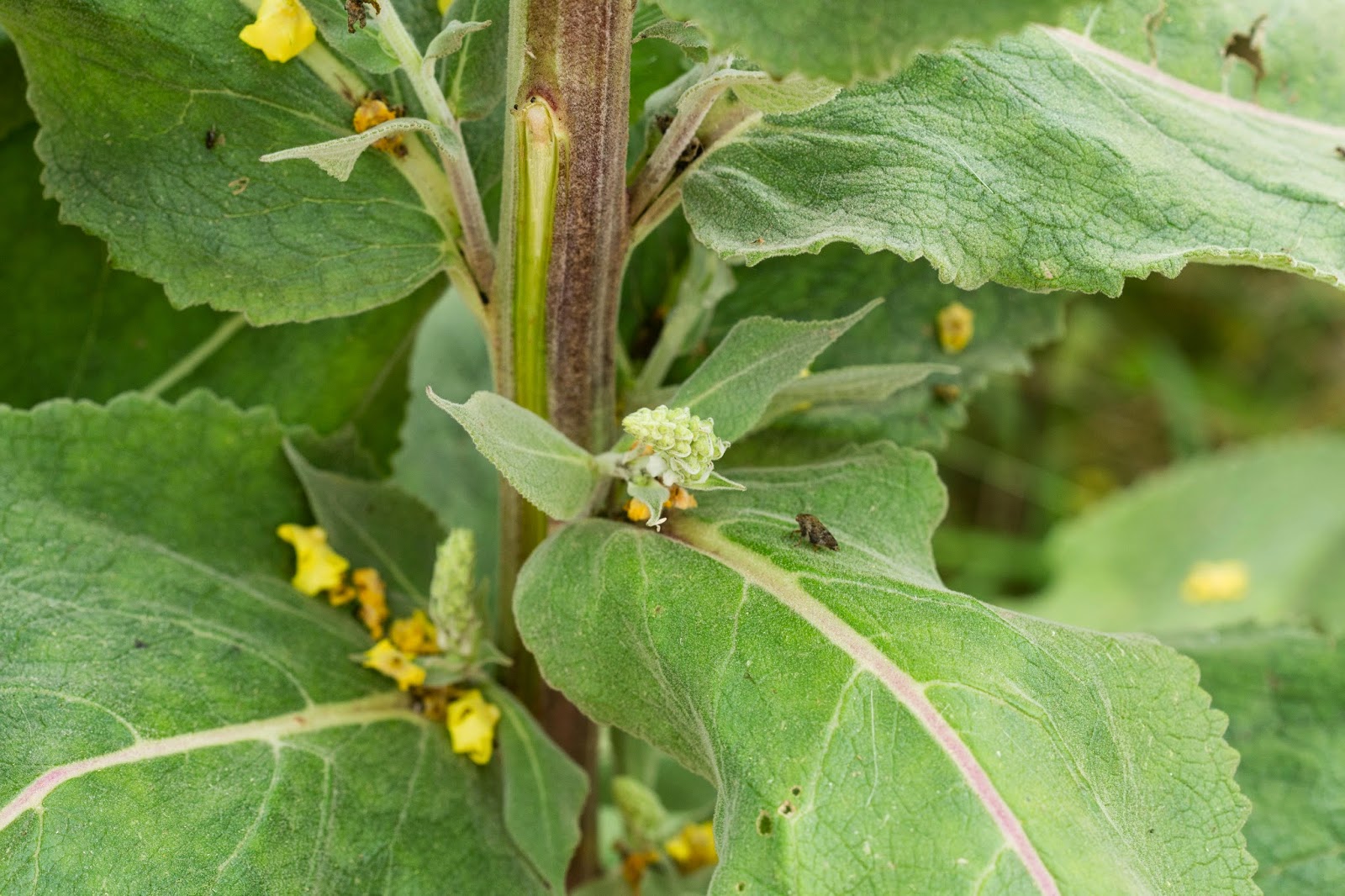 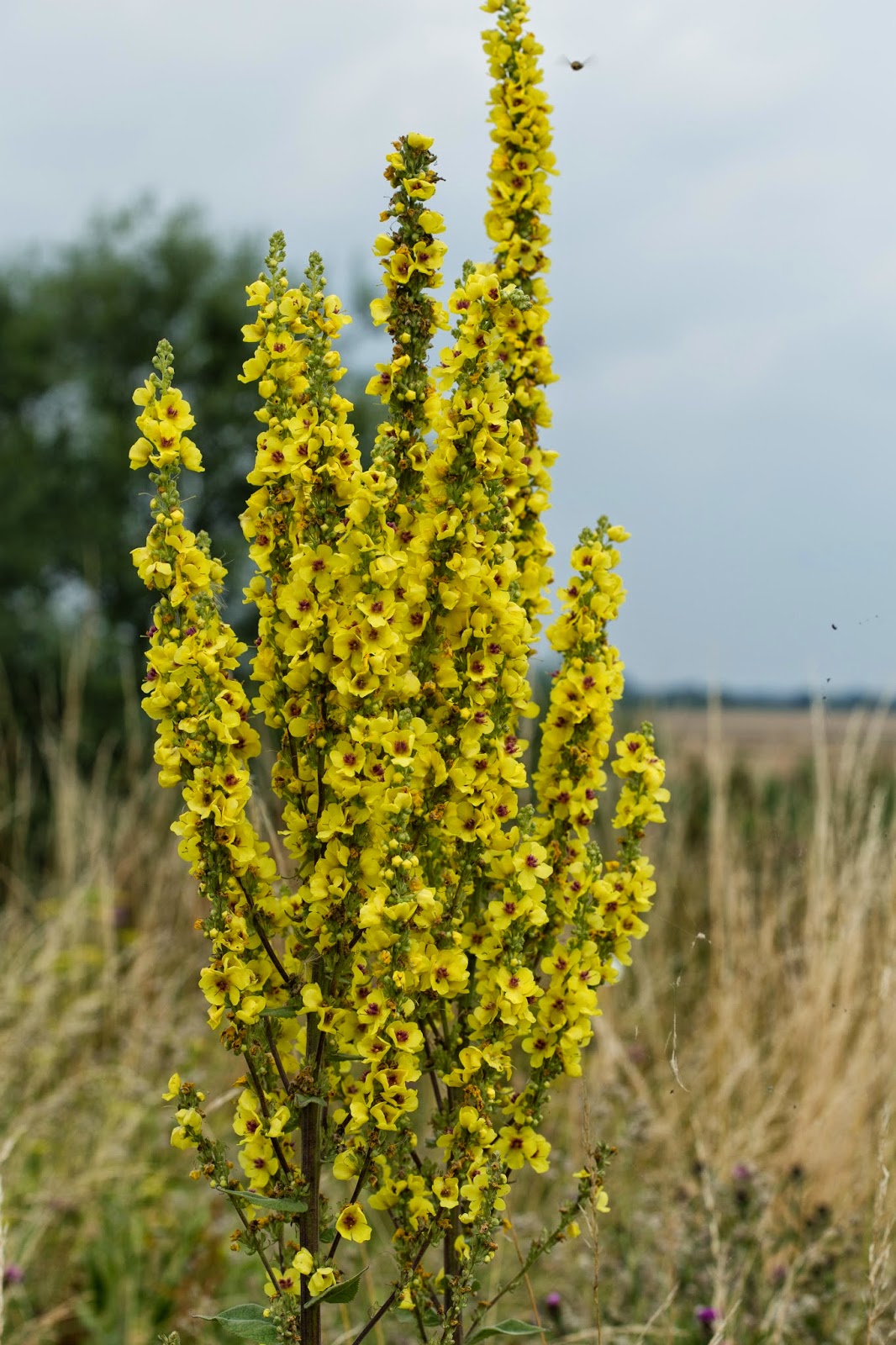 A rare hybrid with the spectacularly branched inflorescence of V.pulverulentum, but with a mix of purple and white hairs on the filaments of the anthers, which are all reniform. The leaves are softly hairy, with some purple colouration along the main vein. 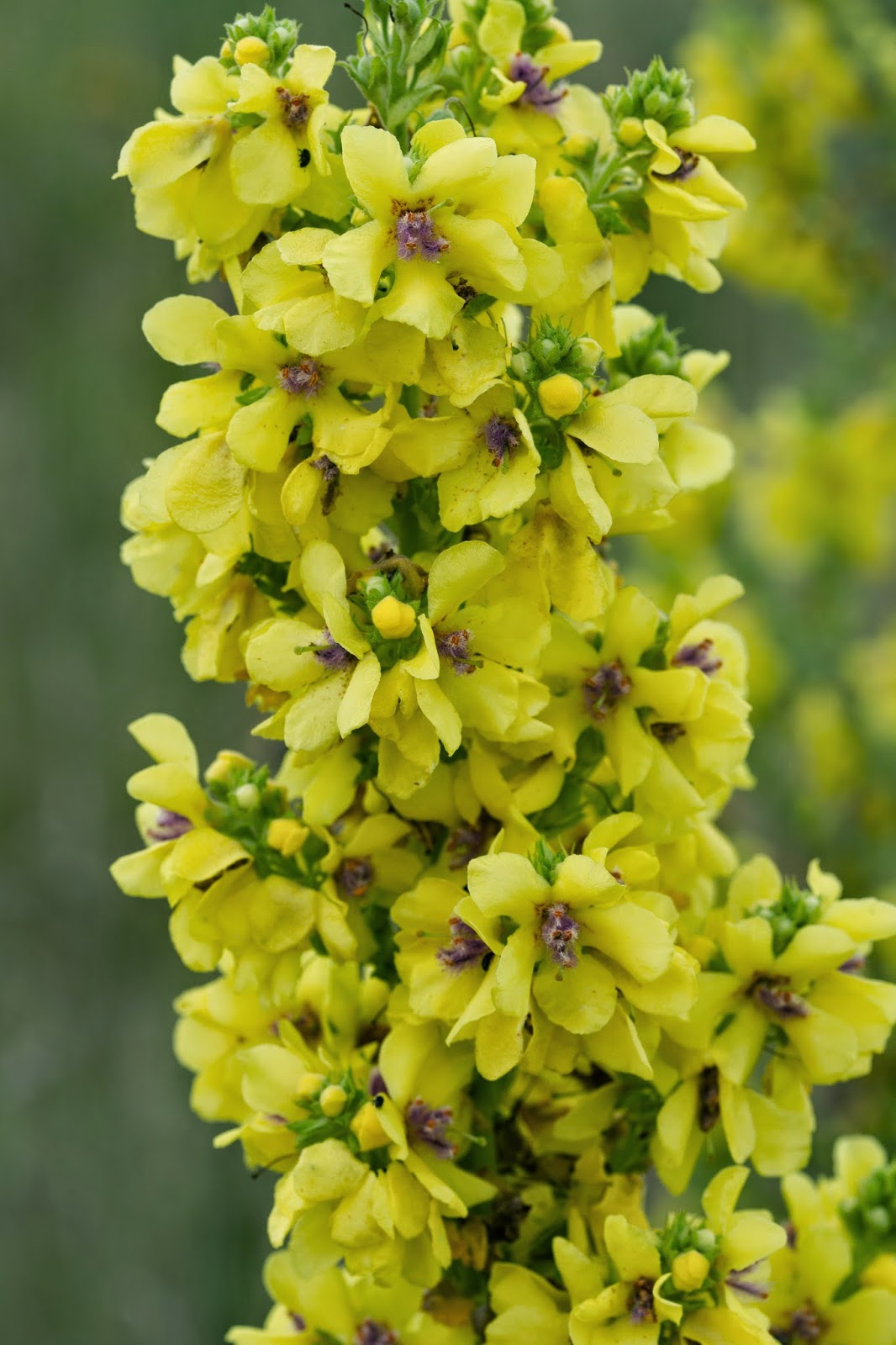 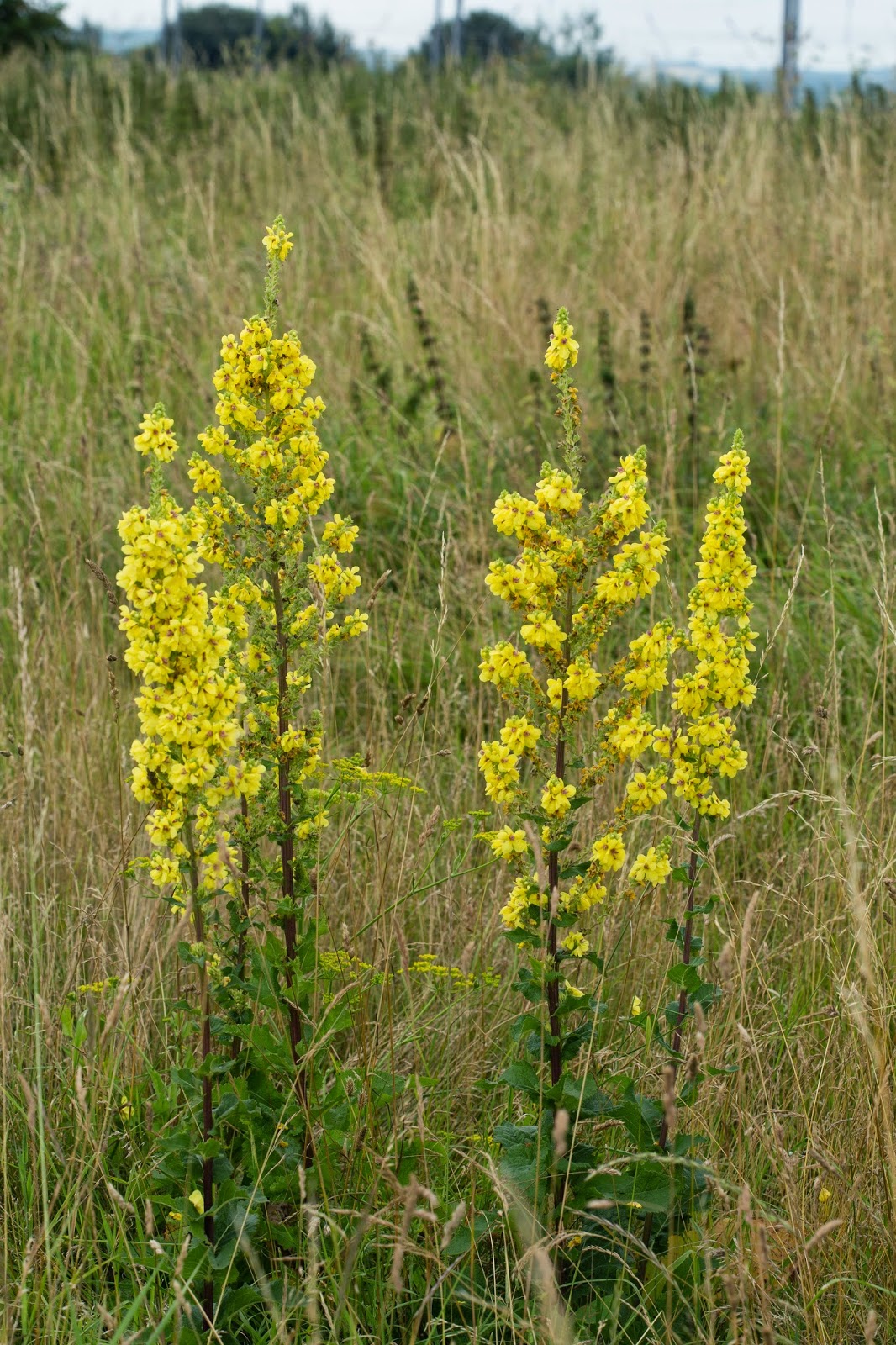 Superficially quite similar to V. x mixtum in the branched inflorescence and presence of violet hairs on the filament. However, there is only one flower per node in the axil of the bract, with no bracteoles and the leaves have a very different texture, being rather crinkled. 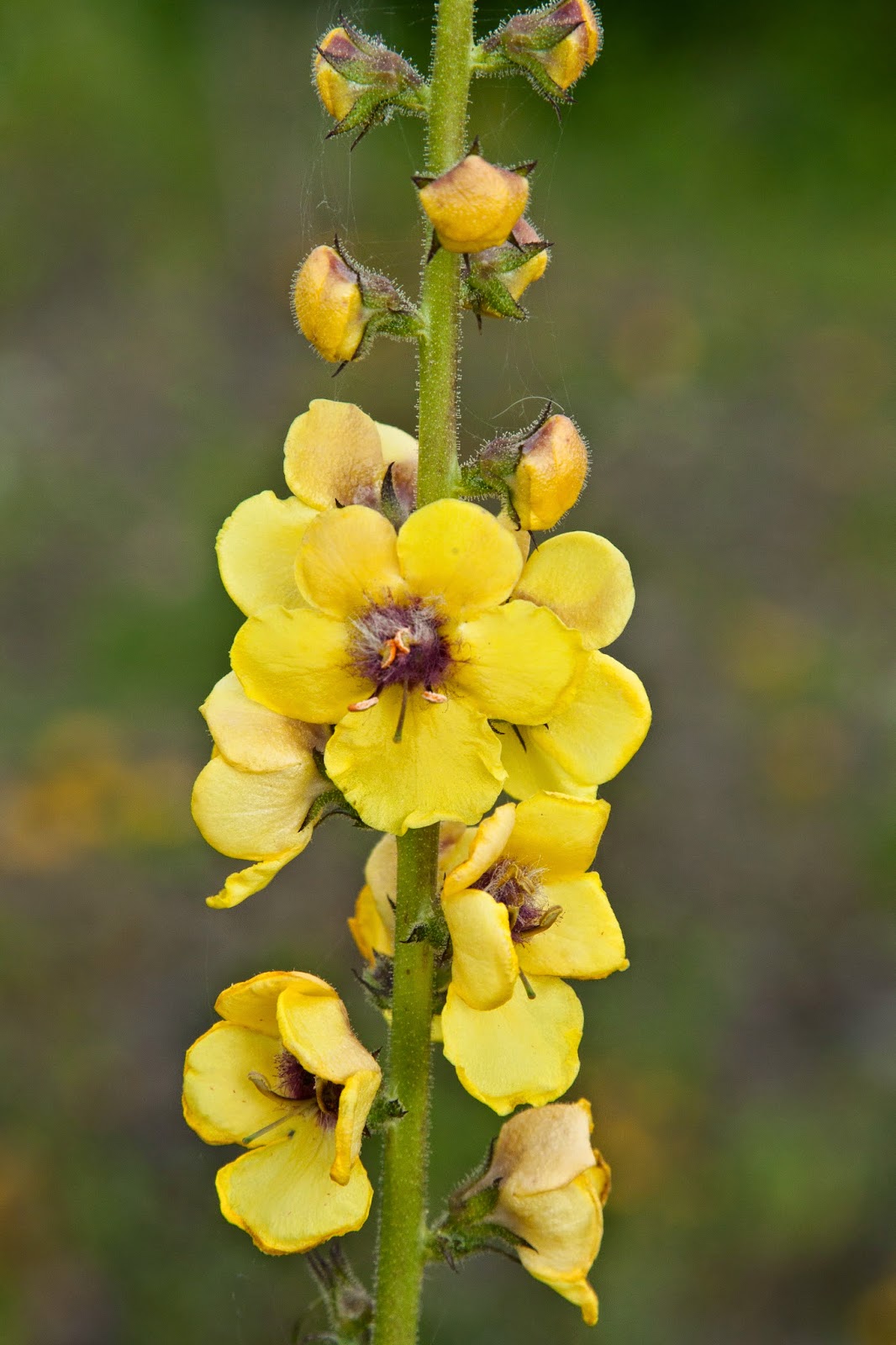 This is possibly native in the west country, but is a fairly frequent casual of waste places elsewhere. The anthers are asymmetrical, the stem has glandular hairs for the whole of its length and the inflorescence is usually simple with yellow flowers and violet hairs on the filaments. The main characters separating it from moth mullein V.blattaria are that there are usually more than one flower per node in the lower part of the inflorescence and the pedicels are mostly shorter than the calyx. 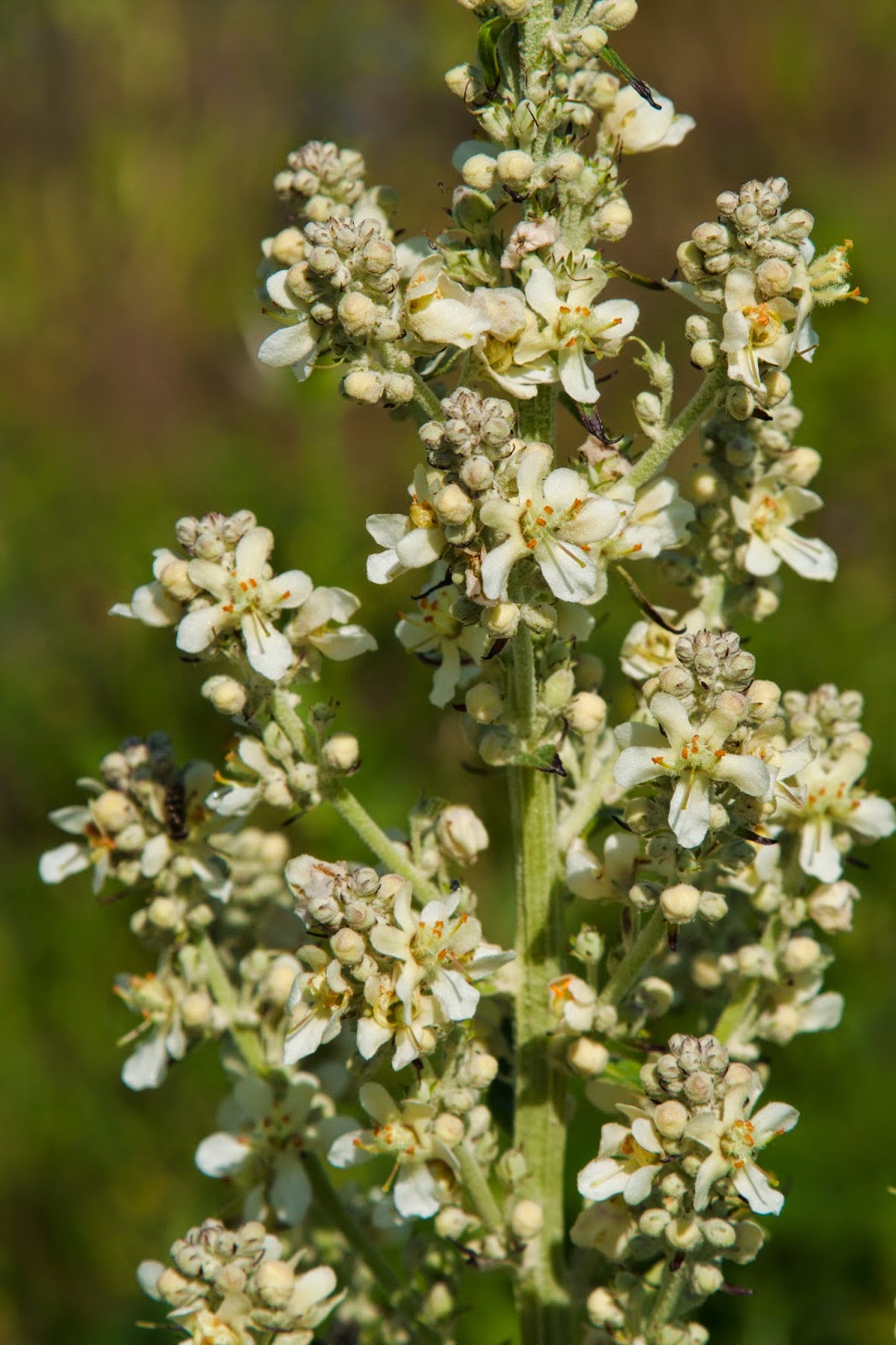 A rare species of southern England, which is also occasionally established on brownfield sites. The anthers are reniform and all the hairs on the filaments are white. The flowers are normally white (although they can be yellow) and the inflorescence is usually branched although it may be feebly so in stunted specimens.